This page hosts a running list of district and individual  schools that have removed Wi-Fi or reduced Wi-Fi radiation. The information is divided into

*Scroll down for the list of individual private schools.

Please note that the countries of Cyprus, France, Belgium and Israel are among the countries that have banned Wi-Fi in classrooms for young children and/or taken major measures to reduce radiation exposure.

Oregon Bill: Health Effects to Children from Wireless in Schools

The state of Oregon has passed SB 283 “A bill relating to exposure to radiation in schools in this state; and declaring an emergency.”  The Act states that the Oregon Health Authority shall:

SECTION 2. This 2019 Act being necessary for the immediate preservation of the public peace, health, and safety, an emergency is declared to exist, and this 2019 Act takes effect on its passage.

Read a the Santa Clara Medical Bulletin article by Dr. Cindy Russell on Schools and Wireless

Collaborative for High Performing Schools Low EMF Criteria/Blueprint For Schools: This criteria gives plans to school on how to reduce and eliminate exposures.

Below is an interview with City of Lakes teachers on how they removed the Wi-Fi from the classrooms due to health concerns.

Note: The schools and school districts listed here are taking steps in the right direction but many of them are not fully protecting students and staff. Safety is only assured with fully wired internet (meaning no wireless) and Low EMF practices.

In January 2018, the Chief Technology Officer of Montgomery County Maryland, one of the top School Districts in the country shared information on Digital Device Safety to all staff in a memo. Read the Memo here.

The MCCPTA Safe Technology Subcommittee would like to share the following recommendations for using technology at school and at home. For Students at School:

For Students at Home:

2017 The Montgomery County School Chromebook Policy states that laptops should stay on tables and not on laps.

“It is the Administration’s view that existing government regulating agencies should be setting proper exposure levels and offering best practices, such as the EPA and FCC”.

“Based on the guidance from these agencies, the Administration proposes the following:

If you are concerned about radiation or heat from electronic devices, follow these guidelines:

Note: This initiative was supported by a local community organization called Worcester Info Team for Health whose Mission Statement was “… to support Worcester decision makers and others in learning about and mitigating the  public health risks posed by the rapid roll-out of wireless devices and infrastructure,  emphasizing the Precautionary Principle and seeking collaboration on creative solutions.”

News Articles on the Worcester School Committees Actions on Wi-Fi

Safety Issues Related to the LAUSD RFR Thresholds : Los Angeles School District states they use precautionary RFR guidelines- however  even a threshold at 10,000 times lower than FCC limits is not safe because peer reviewed published scientific research has shown harm at levels hundreds of thousands times lower than FCC limits. The school district is in fact increasing wireless exposures with Wi-Fi access points and increasing exposure to students and staff. LAUSD is not ensuring safety with these actions.  In addition the LAUSD measures the radiation in the building by averaging the power density which masks areas of high intensity and peak exposures. From a human health standpoint, the RFR measurements need to include peak readings in addition to the cumulative length of time children are exposed to RF radiation in order to fully understand their exposure. Until these measures are taken, one cannot adequately evaluate the EMF environment.

Note on Safety: Digital Device “Best Practices” that still allow Wi-Fi access points in classrooms- still allow microwave exposures to the children and such practices are not adequately protective to children. These District actions seem to be acknowledgment that wireless device expose the body to radiation. However, such “Best Practices” still allow access points to be powered on and thus are always exposing the students and staff to continuous microwave radiation regardless of the devices being in use or not. In addition, devices are also continuously transmitting during student use of the internet and no procedure is in place to ensure that Best Practices are followed so that the transmissions are turned off when the internet is not needed.  Therefore these “Best Practices” do not mitigate the risk nor do they protect students from School District created wireless exposures.

SCHOOLS THAT ARE REMOVING WI-FI OR REDUCING CHILDREN’S EXPOSURE

NOTE: EHT is listing these actions as they happen. Sometimes things change over time. Please contact us if information needs updating. Please also contact us if a school needs to be on this list that we have not identified.

2019: Castle Hill High School: Installed special plugs so that the wireless WAP antennas are OFF except when teacher decides to use them in each classroom.  The school has a policy to inform and educate  students about cell phones and wireless radiation and officially  recommends reducing exposure. They teach students to turn the wireless OFF on their devices. 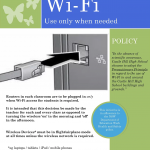 2017: Sacramento California USA Waldorf School: WiFi will be turned off when not in use starting in Fall 2017.

2016 Italy: Turin Mayor Chiara Appendino laid out plans “to cut back on Wi-Fi in state schools and government buildings over concerns that radiation might damage people’s health”.

2016 Italy: Mayor of Borgofranco d’Ivrea (Italy) orders Wi-Fi to be turned off in schools.

Denmark Schools that have removed or reduced wireless exposure

2016: The Piemonte Region has adopted a resolution to limit EMF exposure

Ashland is the first school district to vote to enact “Best Practices” in classrooms and publicly post these instructions which include turning off Wi-Fi when not in use and keeping devices in a table, not a lap

News article on these “Best Practices” to turn the WiFi off when not in use,

2016: Linuwel School , Australia ,WiFi in some classrooms, Can accommodate children with EHS.

2014: Friends Community School: Wi-Fi turned off in wing for lower elementary school students. WiFi routers moved OUT of classrooms into hallways for older grades to reduce EMF exposure. Ethernet wires made available in classrooms for families who want children on corded (not wireless) computers.

2014: The St. Augustine School in Italy turned off Wifi and goes back to Wires.

2011 Aurora School in Ontario removed Wifi and replaced with hardwired.

This list covers bans of cell phones that occurred after the schools found cell phones in classrooms to be distracting and problematic. It is not necessarily because of the radiofrequency and health issues. This is not a complete list but rather a list as stories make the news starting in 2017. Hyperlinks goto news source

France: Cell Phones totally banned in schools for students up to 14  years old. The ban includes hallways, playgrounds and in between classes.  Read more about French policy here and read the 2017 news article in Le Monde  “No More Phones in Schools and Colleges here” here. The policy will be in place by September 2018.

The above US bans are not related to cell phone radiation issues butinstead- the way that cell phones disrupt educations.