2016: Ministry of Education banned cell phones during the school day.

Note: Although Israel has laws in place to reduce electromagnetic radiation, the law is not often followed in practice.

Since 2013 – Israeli Ministry Of Education has issued guidelines limiting WiFi radiation in schools.

Note: Despite the precautionary recommendations of the Health Ministry and the statements in Education Ministry regulations for the preference of wired (not wireless) networks-  the reality is that wireless is still being deployed in schools. ICNIRP limits are presented as the limit for comparison at the same time that it is stated that non-thermal effects and effects from long term exposure are possible. The actual practice in Israel is different than the official stance and this has prompted strong outcry from doctors, parents, and citizens for the government to be accountable to children’s health.

2016: The Mayor of Haifa calls for the removal of Wi-fi from all schools. Haifa Mayor Yona Yahav said that “When there is a doubt when it comes to our children, there is no doubt”. 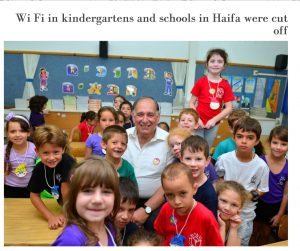 TNUDA – “Recommendations for prudents use of cellphones in Israel” Include: