Health Effects seen in US Embassy Employees Exposed to Microwaves During the Cold War & Havana Cuba: A Connection?

During the Cold War, the Russians bombarded the US embassy in Moscow with radiofrequency (microwave) radiation for several hours a day  for decades.

In 2017, U.S. State Department officials contended that Cuba staged a sonic or some sort of attack on employees of the American embassy, causing a variety of neurological symptoms which include cognitive difficulties and problems with balance, eye tracking, sleep disturbances and headache.

A  2018 publication in JAMA The Journal of the American Medical Association  authored by the team of doctors at the University of Pennsylvania who examined 21 of the U.S. government (Cuba)employees found the patients had suffered from concussion like symptoms—but without any blunt trauma to the head. The Associated Press reported that MRI scans showed damage to white matter in the brains of embassy employees.

Could there be a connection between the two embassy situations?

Some reports say scientist it is crickets while other question how crickets could cause brain injury.

CNN, Microwaves suspected in ‘sonic attacks’ on US diplomats in Cuba and China, scientists say September 2, 2018

NPR, Doubts Rise About Evidence That U.S. Diplomats In Cuba Were Attacked, March 25, 2019

Since 2016, dozens of American officials have come home from Cuba and China with unexplained brain trauma. Evidence shows it may be the work of another government using a weapon that leaves no trace

60 Minutes Is an invisible weapon targeting U.S. diplomats? How do you report on an attack that you can’t see? 60 Minutes producers say they approached it with skepticism, March 2019

Allen Frey, Opinion: Cell Phone Health Risk? Security concerns during the Cold War may have led to the generation of misinformation on the physiological effects of microwave radiation from mobile phones.

The US Embassy in Havana, Cuba

“By August 2017, physicians at the University of Miami and Penn had diagnosed 24 of 80 embassy employees with mild traumatic brain injury, likely caused by “trauma due to a non-natural source.”

“In this preliminary report of a retrospective case series, persistent cognitive, vestibular, and oculomotor dysfunction, as well as sleep impairment and headaches, were observed among US government personnel in Havana, Cuba, associated with reports of directional audible and/or sensory phenomena of unclear origin. These individuals appeared to have sustained injury to widespread brain networks without an associated history of head trauma.”

The US Embassy in Moscow 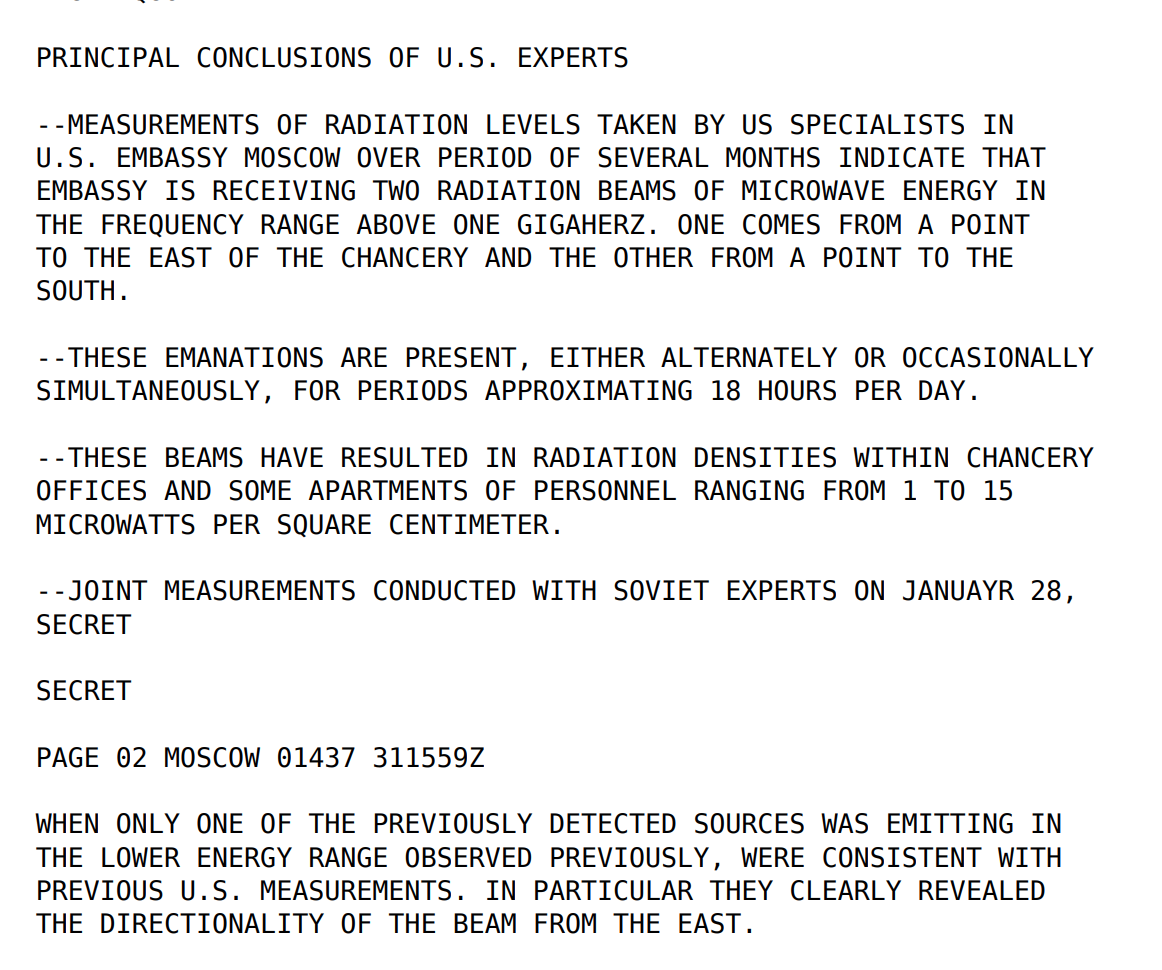 During the Cold War, the Russians bombarded the US embassy in Moscow with radiofrequency (microwave) radiation for several hours a day from the 1950s until 1979. The US government never confirmed the reason for the irradiation though there were several theories.  One was for covert audio surveillance of the embassy.  The wireless listening devices employed by the Russians were passive, and they were only activated in the presence of radiofrequency electromagnetic fields.  “The Thing” was the first such listening device discovered in the Ambassador’s office of the US embassy.   Other theories were for interference with American electronic‐intelligence equipment or for affecting the health or behavior of the employees at the embassy.  The irradiation exposed up to 3500 employees and dependents at the US embassy during this time, and it was kept secret from the embassy employees until 1976.

This really happened.  Here are some articles about it

In 1978, epidemiologist and Professor Abraham Lilienfeld from John Hopkins University was hired to do a study on the health effects on the US embassy employees in Moscow who had been irradiated with microwaves.  The study is long, over 400 pages.  The study concluded that no significant increases were seen in cancer and morbidity rates caused by the microwave exposure but recommended that the employees continue to be monitored for long-term health effects since the time period covered by the study was relatively short.  There was no follow-up monitoring of the employees.    However, looking at actual data, some statistically significant increases in health effects  (p<0.05) were seen in the US Embassy employees who were exposed to chronic levels of microwave radiation compared to a similar population that was not located in Moscow.  There were about 3500 employees and dependents at the US embassy in Moscow during the study period, making this one of the largest epidemiological studies on the biological effects of chronic exposure to microwave radiation.

The Exposure levels to the employees:

The statistically significant health effects (p<0.05) seen in the US Embassy employees are as follows:

A review of the Lilienfeld study

concluded there were 4 statistically significant effects seen in exposed employees:

Ambassador Walter Stoessel, who served at the US embassy in Moscow during the time it was irradiated and who died of leukemia at age 66, wrote a memo in 1976 that the radiation levels measured at the embassy, 1-15uW/cm2, is many times higher than background levels of cities and that their medical experts say prolonged exposure at the levels at the embassy is a potential health hazard.  The memo was classified until 2006 and released by wikileaks.  The radiation levels measured were lower than the current US government exposure guideline, which is the FCC maximum permissible exposure limit of 1000uW/cm2 for 30 minutes at frequencies 1.5-100 GHz.