2012 US National Legislation on Cell Phones and Wireless Devices

It received strong support from many organizations including the American Academy of Pediatrics. This Bill did not make it out of committee and did not become law in the Unites States. It serves an excellent of example of legislation on radiofrequency radiation and wireless devices.

Click here to read the text of the Bill

“The AAP strongly supports H.R. 6358’s emphasis on examining the effects of radiofrequency (RF) energy on vulnerable populations, including children and pregnant women. In addition, we are pleased that the bill would require the consideration of those effects when developing maximum exposure standards. Children are disproportionately affected by environmental exposures, including cell phone radiation. The differences in bone density and the amount of fluid in a child’s brain compared to an adult’s brain could allow children to absorb greater quantities of RF energy deeper into their brains than adults,”

2012 AAP Letter in Support of Cell Phone Right To Know 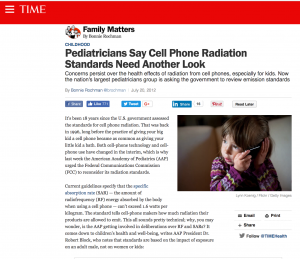 Written by the Congressional Research Service

See it online at https://www.govtrack.us/congress/bills/112/hr6358/summary

Cell Phone Right to Know Act – Requires the Director of the National Institute of Environmental Health Sciences and the Administrator of the Environmental Protection Agency (EPA) to:

(1) conduct or support a comprehensive research program to determine whether exposure to electromagnetic fields from mobile communication devices causes adverse biological effects in humans, including vulnerable subpopulations such as children, pregnant women, those with compromised immune systems and hypersensitivity reactions, men and women of reproductive age, and the elderly;

(2) disseminate research results to the general public; and

(3) report findings and conclusions to Congress.

Amends the Public Health Service Act to establish a graduate educational loan repayment program and authorize national awards for researchers in such fields.

Amends the Communications Act of 1934 with respect to the prohibition on state or local government zoning regulation of personal wireless service facilities on the basis of the environmental effects of radiofrequency emissions. Excludes from such prohibition state or local regulation based on the adverse human health effects of emissions of radiofrequency electromagnetic fields.

See it online at https://www.govtrack.us/congress/bills/112/hr6358/summary

2012 AAP Letter in Support of Cell Phone Right To Know


Read more about US Public Policy in regards to cell phone and wireless radiation.