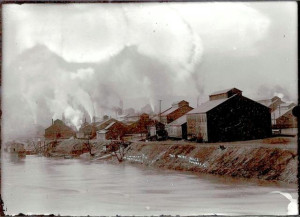 In late October 1948, a noxious smog enveloped the Monongahela River Valley town of Donora, Pennsylvania. In the 5 days October 26 to 31, 20 people died. Within 1 month, about 70 had lost their lives and the town funeral parlor ran out of caskets. And some, like Devra Davis’ grandmother, were debilitated for the rest of their lives.

At the turn of the 20th century, the Donora Mill attracted people because “Smoke meant jobs,” according to Dr. Davis who tells the story of Donora’s Killer Smog in her book When Smoke Ran Like Water. This work was the first book on the environment since Rachel Carson’s Silent Spring to become a National Book Award Finalist in non-fiction and has now been translated into more than a dozen languages.

On Oct. 26, 1948, the small steel town of Donora, Pa. was blanketed by a thick, toxic smog. Within a week, some 20 people had died. Nothing was done to clean up the zinc mill responsible, however, just as little was done in 1952, when a ‘killer smog’ in London caused at least 2,800 deaths in one week.” Amanda Paulson, Christian Science Monitor 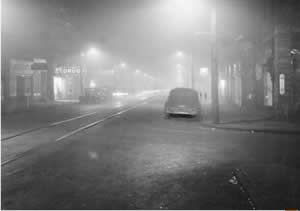 A street scene at noon in Donora, 1948, where streetlights were needed because of low visibility from smog.

The cause of the Donora smog proved to be a deadly mixture of emissions from the plants and coal furnaces located in the valley and town. Sulfur dioxide, carbon monoxide and metal dust—a possibly highly reactive fluoride gas—were trapped in the town by a layer of stable cool air that kept warmer polluted fumes from escaping. Years later, views over the valley showed large patches of land on which no vegetation would grow. The investigation into the Donora Smog Disaster was essential to the first federal clean-air act, passed in 1955. 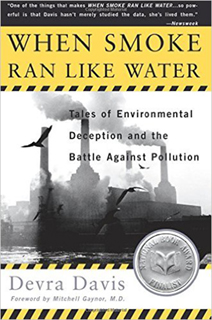 Nothing less than an indictment of the world’s biggest polluters … with the kind of aching personal testimony usually purged from scientific publications … Everyone, really, has a personal stake in this topic.Dallas Morning News
In the tradition of Rachel Carson … epidemiologist Devra Davis is a hero with a nose for trouble.New Scientist

John Hopkins Magazine: Cutting Through the Smoke
A Cloud With a Silver Lining: The Killer Smog in Donora, 1948 By Erin Peterman, Spring 2009
There never was such a fog: By David Noon

“Major federal clean air laws became a legacy of this environmental disaster that focused national attention on air pollution. In late October of 1948, a heavy fog blanketed this valley, and as the days passed, the fog became a thick, acrid smog that left about 20 people dead and thousands ill. Not until October 31 did the Donora Zinc Works shut down its furnaces — just hours before rain finally dispersed the smog.From the plaque erected by Justin Shawley in Donora, PA