Like cell phones, aspartame has never been fully evaluated for its long term impact on public health. Aspartame is an artificial sweetener used in more than 6,000 products worldwide, ranging from dental floss to childhood medications to regularly consumed foods such as so-called “diet” sodas. Many companies are now removing this chemical from products due to consumer demand and concerns. However, it is still found in many diet sodas, beverages, “light” yogurts, sugar-free desserts, gums and pharmaceuticals, and its presence is not always labeled. It is in “Equal” and the blue sweetener packets at your favorite coffee shop.

This artificial sweetener is made from the waste products from human excrement and are genetically modified E. coli bacteria. It has never been proven safe and its consumption results in your body’s exposure to known toxic substances such as formaldehyde and methanol. Aspartame is composed of about 40 percent aspartic acid, a free-form amino acid that has the ability to cross the blood-brain barrier. Aspartame is not only linked to cancer but also impacts our nervous system and imbalances in hormones and metabolism.

How did Aspartame get on the market considering the scientific concerns?
For 16 years prior to 1981, the FDA had denied the petition for approval of aspartame due to research indicating it could induce brain tumors and is neurotoxic. In 1981, as part of Ronald Reagan’s transition team, Donald Rumsfeld, CEO of Searle, handpicked Dr. Arthur Hull Hayes Jr. to be the new FDA Commissioner. In one of his first official acts, Hayes overruled the Public Board of Inquiry, ignored the recommendations of his own internal FDA team of science experts and approved “NutraSweet” (aspartame) for limited use.
Why do the FDA and European Food Authority deem it safe?
Indeed, the FDA, and most recently the European Food Safety Authority, confirmed the safety of Aspartame. We recommend a deeper look into their reports. First, they state that although there is the exposure to certain toxic chemicals, the exposure is “low.” These toxic chemicals includes metabolites of aspartame such as  methanol, formaldehyde, aspartic acid (which can be converted to the more potent excitatory neurotransmitter glutamate) and phenylalanine. It is important to note that our cancer risk increases because of cumulative exposure to toxins. By researching chemicals one by one and not looking at the totality of our exposures, we failed to address their combined impact on our health.

In making this judgment of safety, FDA and EFSA effectively discounted long-term studies from the Ramazzini Laboratory in Bologna, Italy, led by the distinguished toxicologists Cesar Maltoni and Morando Soffritti. The Ramazzini scientists have found that when exposures begin early in life and continue throughout the natural lifetime of rodents, by the time the rodents reach the equivalent of old human age, they develop many more tumors. This is important, because most other animal studies end when the animals are middle-aged and thus are not able to see this greater risk.

Perhaps more importantly, aspartame does not help us lose weight and in fact acts as an appetite stimulant in both animals and humans.  Studies find that those consume the most aspartame in their diets, tend to be more obese. There’s also growing evidence of neurological impacts ranging from migraines to tingling of hands and feet to difficulties concentrating.

Perhaps put this as a link. Several scientists have noted that the close association between increased consumption of aspartame and the development of obesity. Many factors including inactivity, the elimination of physical education from many school programs, and increased screen time, contribute to obesity.  In fact consuming aspartame tricks the brain into thinking it has been fed sugar and actually ups the demand for more food resulting in an increase in overall appetite as a result. 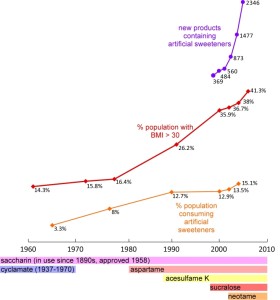 In 2007, a “sweeping review” of research studies sponsored by industry on aspartame stated there is “no evidence that the non-nutritive sweetener causes cancer, neurological damage or other health problems in humans”. This expert panel was funded by Ajinomoto Company Inc., a manufacturer of aspartame. This report minimized “low exposures” and called into question research showing associations with cancer and health effects. This “expert” panel was pulled together by The Burdock Group. As the Center for Public Integrity pointed out, “Burdock Group Consultants is among the top five consulting firms hired by ingredient manufacturers for GRAS [generally recognized as safe] assessments.” (in other words, they are industry consultants), and they are also tied to Big Tobacco.

This review completing discounted studies that did not agree with the industry supported view and failed to consider that cancer arises from combined exposures that take place over long periods of time and at different stages of vulnerability. Dr. Davis has expressed strong disagreement with the EFSA review proclaiming aspartame safe, as have a number of other experts in the field who are cited below.

Time: What Diet Soda Does to Belly Fat

Daily Mail: Revealed: How a can of DIET Coke makes your body store fat, rots teeth and affects you in the same way as cocaine within ONE HOUR

10/2014 Scientists once again question the safety of aspartame: Artificial sweeteners found in diet soda and yoghurt, which are consumed by millions daily, can raise the blood sugar level instead of reducing it, according to a new study published by the scientific journal Nature.

Health Ambition: “7 Steps to Replace Diet Soda with Something Healthy”

RESEARCH ON ASPARTAME AND DIET SODA

European Food Safety Authority (EFSA): Output of the public consultations on the draft opinion on aspartame

Phenylalanine is produced whenever aspartame is consumed. Phenylketonuria is a rare genetic disorder in which the body can’t break down phenylalanine, an amino acid found in many foods and aspartame. Phenylalanine buildup in the blood can prevent other essential chemicals (like amino acids) from getting to the brain. Unless phenylalanine intake is severely limited, children with PKU suffer from abnormal brain development.

PKU is usually detected in babies by a routine blood test shortly after birth. People with PKU must follow a phenylalanine-restricted diet. It’s important that people with PKU limit their intake of aspartame. That is why any product containing aspartame has the warning “Phenylketonurics: contains phenylalanine.”

Physical SymptomsMetabolic and Endocrine SymptomsNeurological SymptomsPsychiatric/ Psychological SymptomsAdditional Side Effects of Aspartame PoisoningIllnesses Triggered by Aspartame PoisoningRelief for Aspartame PoisoningAspartame Detoxification Program
The effects of aspartame are far reaching and negatively impact many organ systems and structures, causing a diminished level of functioning and enjoyment of life.
Metabolism and hormones are the cornerstone of our body’s production of energy and ability to regulate itself. We produce a variety of hormones that regulate our overall health and wellness.

Diabetes control and increased weight are side effects of aspartame use. Others report hair loss, menstrual irregularity and severe premenstrual syndrome. Some may note marked weight loss and problems with low blood sugar.

The nervous system is a very delicate machine and very sensitive to minor amounts of toxins. Aspartame negatively impacts brain function and can trigger or mimic many serious disease processes.

Serious psychiatric problems are known to occur due to aspartame and include aggressive or suicidal behaviors, severe depression, birth defects and severe cognitive problems in the baby, anxiety, insomnia, phobias and irritability.
The health dangers of aspartame are widespread and can affect multiple body systems. Additional health dangers include: persistent craving for sweets, aspartame addiction, irreversible brain injury and cognitive impairment, stomach ulcers, birth defects, hyperactive behavior in children, aggression, severe depression and suicide attempt and ultimately death. Scientists and anecdotal patient reports continue to show the global negative effects on the human body.
Aspartame poisoning triggers many subtle diseases. Even under the best conditions and in the hands of the skilled physicians, these conditions are difficult to detect. Diseases such as ALS, multiple sclerosis, Lupus, post-polio syndrome and Lyme disease can all be triggered by aspartame. Other problems such as Meniere’s disease, non-Hodgkin’s lymphoma, thyroid disorders and Alzheimer’s disease can all result from aspartame.
What we eat in our diet has a direct role in the development of many health conditions. In most cases, aspartame poisoning resolves if the individual simply stops using sweetener-containing products. Cut out products like low calorie pudding, diet sodas, and gelatin mixes, and any powdered drink mix containing aspartame. Even some dried fruits and cereals contain aspartame. Reading food labels and avoiding aspartame can literally be a life changing activity.
Detoxifying your body from the ill effects of aspartame is a powerful method to reverse any symptom related to using this artificial sweetener. Over 92 different signs and symptoms are attributed to aspartame.