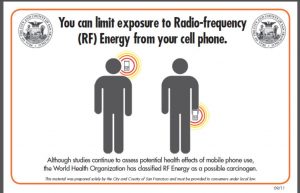 San Francisco became the first city in the country to pass and adopt cell phone safety legislation. The ‘Right to Know’ ordinance was unanimously approved by the San Francisco Board of Supervisors on August 2, 2011. The ordinance required cell phone retailers to provide their customers with information detailing that if a user holds a phone too close to their body, a phone may exceed the radiofrequency energy exposure limitation set by the Federal Communications Commission. Implementation of the ordinance was blocked in 2012 after a three year court battle.

Cell phone retailers were to provide information that provides measures customers can take to reduce their exposure to radiofrequency energy from cell phones. The original ordinance required that this information be provided via a store poster, warning statements included in sample phone displays, and in a factsheet to be given out with each phone sold and upon customer request.

The CTIA (The Wireless Association) sued the city, then later settled with the City to block implementation of  the Ordinance in exchange for a waiver of attorney’s’ fees.

Watch a video of court deliberations at the 9th Circuit of Appeals  below. The case was argued before Judges Schoeder, Callahan, and Korman by CTIA’s Andrew McBride of Wiley Rein and Deputy City Attorney Vince Chhabria represented San Francisco. If you are interested in the pleadings, CTIA has posted one recent pleading. The other side has 2 pleadings available on their website: San Francisco’s opening 9th Circuit brief (Jan. 25, 2012);Francisco’s opening 9th Circuit brief (April 4, 2012)

Although implementation in cell phone retail stores was halted, the City Cell Phone Radiation Webpage remains online, as well as a  webpage detailing ways to reduce exposure to wireless radiation.

“It is the policy of the City and County of San Francisco to adhere to the Precautionary Principle, which asserts that government should not wait for scientific proof of health or safety risk before taking steps to inform the public of the potential for harm. There is debate in the scientific community about the health effects of cell phones, however numerous studies have identified evidence of an increased risk of brain cancer and other illnesses as a result of cell phone use. Leading epidemiologists who have studied the effects of radiofrequency energy absorbed from cell phones have recommended that the public be informed of the potential for adverse health effects from long-term cell phone use, particularly for children and pregnant women.”

San Francisco City Webpage – “Is there a way to use my cell phone and reduce my exposure to radiofrequency energy?” 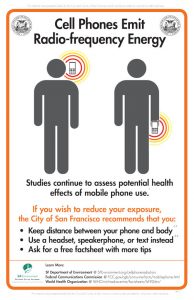 Poster to be displayed on Cell Phones and RF Radiation 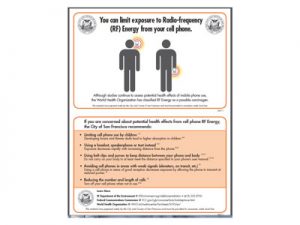 Factsheet for the Public on Cell Phone Radiation

Read an Open Letter to San Francisco Mayor and Board of Supervisors from Dr. Joel Moscowitz

Video from testimony to the City of San Francisco

Press conference with survivors speaking on cellphone health risks at the San Francisco Commonwealth Club. Cellphone cancer victims tell their personal stories and those of their lost loved ones.

The videos below are from news stories, testimony given during hearings on the San Francisco cell phone ordinance and press conferences related to the ordinance.