Cyprus has removed Wi-Fi from elementary schools, reduced RF in pediatric wards of Archbishop Makarios Hospital and launched multiple pubic awareness campaigns and support a strong educational initiative to educate children and families about cell phones and wireless radiation. They have developed comprehensive brochures for public health and video public service announcements regarding the issue.

Please take the time to read through these initiatives and watch some video’s of Dr. Stella Michaelidou , President of the Cyprus National Committee on Environment and Child Health lecture on their Health Initiatives. Comprehensive educational brochures are uploaded at the end of this page in English and Greek. If you choose to translate these brochures please share this with the Cyprus committee and Environmental Health Trust so we can distribute them.

News: Petition against 5G in Cyprus

The Campaign is a cooperation between the Archbishop Makarios III Hospital (NAM III) and the Cyprus Committee on the Environment and Children’s Health (CyCECH) with the active support of the Executive Director of the Archbishop Makarios III Hospital, Dr. A. Neophytou, the Director of the Pediatrics Department, Dr. A. Elia. It is a collaboration of Dr. Andreas Sergis and Dr Antonis Kleanthous and the nursing staff of the Pediatric Intensive Care Unit (PICU).

2017 Directive of the Minister of Culture and Education to Ban Wi-Fi from kindergartens, Remove Wi-Fi from Elementary Classrooms and Halt Deployment. 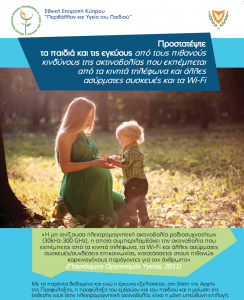 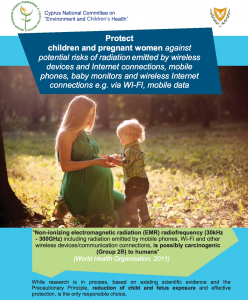 EMF Brochure of the Cyprus Committee Translated into English

The 2017 Nicosia Declaration on Electromagnetic and Radiofrequency Radiation was signed at the November 11, 2017 seminar “The impact of non-ionizing radiation on health: A myth or an emerging medical challenge?” organized in cooperation with the Austrian Medical Chamber, the Medical Chamber of Vienna, the Cyprus Medical Association and the Cyprus National Committee on Environment and Children’s Health.

April 2016 – Dr. Michaelidou, President of the Cyprus National Committee, gives presentation: “Environment and Health of the Child”, presenting on the issue of Electromagnetic radiation and its effects on children’s health.

President of the National Committee “Environment and Child Health” with Professor Loukas Margaritis speaking in a news piece. https://www.youtube.com/watch?v=WumF2qOUKrU