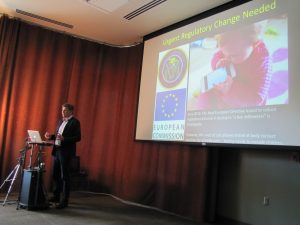 The cell phone radiation absorption measurements of the over 350 cell phones France tested were presented in an expert scientific symposium in Jackson Hole, Wyoming on July 31, 2017 sponsored by Environmental Health Trust. This lecture marks the first time the test measurements have been presented in the United States by an expert from France.

“In France we have a government agency that has been testing phones next to the body since 2012. We have recently had these results released and they clearly show that most phones—9 out of 10 in 2015—exceed current allowable limits by over 3 times,” stated Arazi.

Although France began testing cell phones in 2012, the measurements were not released until June 1, 2017 after months of

pressure from Arazi. The newly released French documents revealed government safety limits are significantly breached when government tests mimicked the real-world scenario of zero distance between the phone and the user—i.e. holding the phone in your bra, shirt or pants pocket, or any other body contact position. 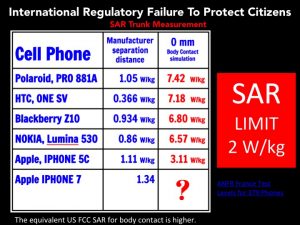 Arazi showed how when the government tested phones at body contact, the levels were over seven times higher than the levels when phones were tested at the manufacturer’s stated separation distance. This increase resulted in many phones having levels that exceeded the European government’s safety limits—levels were over 3 times higher than the limits. However, the phones were still marked as “compliant” because regulations do not require body contact testing.

“This is not just an European issue, it is an international scandal,“ stated Arazi, pointing out that all countries’ regulations are outdated. “Professor Om Gandhi—one of the originators of the test limits 30 years ago—says that if these numbers were converted to the US testing regime, we are talking about the reality that some cell phones exceed US regulatory limits by over 9 times the limit.”

“Dr. Arazi has made history,” stated Devra Davis PhD, MPH, President of the Environmental Health Trust. “His work in calling for transparency has resulted in comprehensive documentation that cell phones would be illegal if they were tested in the way people use them—touching the body.”

Davis points out that for over a decade researchers have repeatedly published about this issue and have long recommended updating “antiquated” cell phone radiation test systems. “Now we have government documentation on hundreds of cell phones providing clear and undeniable evidence that current cell phone test methods fail to protect the public.” 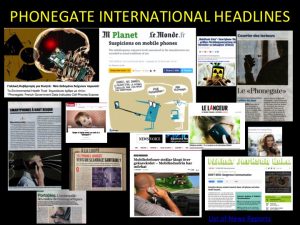 Arazi showed how “Phonegate” has made news headlines in countries all over the world. Arazi ended his lecture with a call for immediate updates to European and International regulations regarding cell phone radiation testing methods.

“Tests must include children with consideration for their unique vulnerabilities. Not only are children smaller and thus will have proportionately higher exposures to cell phone radiation than adults but also remember that children’s brains are rapidly developing. Regulations must assure children are protected,” stated Arazi, reiterating the recommendations in the 2016 Government of France national health agency (ANSES) report on “Children’s Health and Radiofrequency,” which first alerted him to the test measurements.

Arazi has coined the issue as “Phonegate” comparing the scandal to the “Dieselgate” Volkswagen scandal. In “Dieselgate,” government tests had uncovered real-world car emissions at higher levels than the car manufacturer reported in lab tests. Now government tests of cell phone emissions have uncovered higher radiation exposure levels in real-world scenarios than most cell phone manufacturers report in lab tests.