California SB 649 would strip the local control of communities to determine wireless facility placement in their rights of way.  The State of California Department of Finance has made the recommendation to oppose SB 649 stating,  “this bill goes too far by usurping city and county zoning authority for infrastructure development, and it potentially imposes reimbursable, state-mandated costs on cities and counties.”

The AARP, the Sierra Club and the Environmental Working Group oppose this Bill. Over 200 cities, and the League of California Cities are opposed to SB 649. 45 out of 58 California Counties  are in opposition to this bill.

This page maintains an updated list of news reports, videos and factsheets related to SB 649. Please scroll down to see the wealth of material generated by this ill advised bill that would streamline 5G cell antennas into neighborhoods and increase exposure to wireless frequencies.

On this page EHT is maintaining documentation on letters of opposition sent to the State, videos of news reports and videos of testimony given to the State lawmakers. Please check in regularly.

If you want to join others in California working to stop this bill please contact Californians For Safer Tech.

Click here to download a PDF of over 60 pages of letters on 5G by scientists and organizations such as the Sierra Club, the AARP and Environmental Working group.

Many organizations have issued Factsheets on SB 649 to educate the public. See below several examples.

EHTs One Page Scientific Factsheet on 5G and Health

One-page flyer for  parents and teachers re SB 649. Firefighters got an exemption for their stations; not kids.

Read “The Firefighters Wake Up Call To Us All” By Susan Foster RE: SB 649 Opposing Cell Towers In Rights Of Way 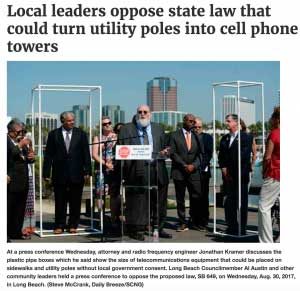 “Big Telecom and its allies in the White House have quietly carried out a campaign to secure rapid and cheap access to those poles, at taxpayer expense. Here in California, state legislators recently advanced a bill introduced by Senator Ben Hueso that would allow wireless service providers to install their equipment on public street poles at below-market rates — and to do so nearly wherever and whenever they choose — all in the name of “streamlining” local permit approvals.” 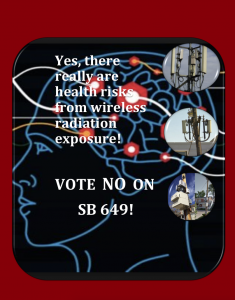 The State of California Department of Finance has made the recommendation to oppose SB 649.

The analysis report defines that SB 649 is likely to create a million dollar unfunded mandate, fails to cure basic wireless digital divide issues; and is fails to address important issues of community aesthetics.
Read the CALIFORNIA DEPARTMENT OF FINANCE BILL ANALYSIS OF SB 649.

The Environmental Working Group is in strong opposition to SB 649.

Letters sent to California State in Opposition To 649

Letter from the Sierra Club

Letter from the American Association of Retired Persons (AARP), July 19, 2017 “This bill undermines the authority of local government..”

Letter from the Alliance of Nurses for Health Environments

Law Office of Harry  Lehmann“Mass casualties are likely in District 10 from passage of 648, July 6, 2017

Law Office Of Harry Lehmann, Second Letter To The State Of California Liability for Damage From Microwave Radiation Exposure Sustained by Senate Bill 649 Will Be Shifted to California State , July 19, 2017

Letter from Dr. Martin Pall in Opposition to SB649

Letter from Dr. Cindy Russell in opposition to SB649

Letter from Physicians For Safe Technology in opposition to SB649

Letter from Dr. Devra Davis to Chair Aguiar-Curry on SB 649

Letter From Susan Foster To Governor Brown About Firefighters

Californians for Safe Technology have created a PSA video below.

Read more letters from cities below.

Guest Blog: ‘Health Exemption for Firefighters sends a Message to the World’ by Susan Foster


City of Azusa Letter of Opposition

City of Humboldt Letter of Opposition

The City of Long Beach Letter of Opposition

Go Fund Me Californians Against SB 649