The 2017 Nicosia Declaration on Electromagnetic and Radiofrequency Radiation

The 2017 Nicosia Declaration on Electromagnetic and Radiofrequency Radiation 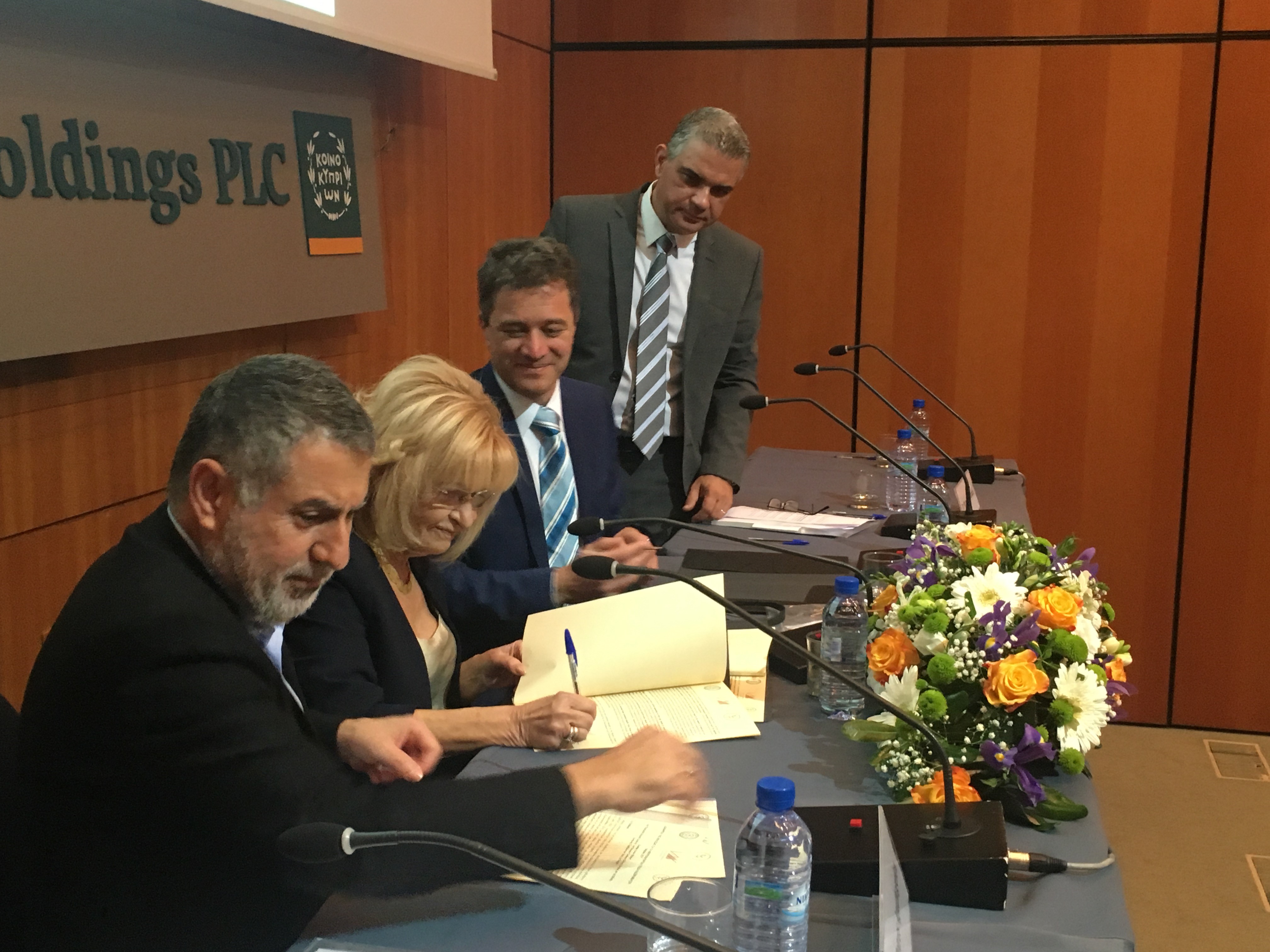 The Signing of the Nicosia Declaration 2017

The Cyprus Medical Association, the Vienna Austrian Medical Chamber  and the Cyprus National Committee on Environment and Children’s Health have signed the Nicosia Declaration  on electromagnetic and radiofrequency radiation and have issued a new position paper and 16 practical steps to reduce exposure to cell phones and wireless radiation. The event was under the auspices of his excellency the Minister of Health Dr. George Pamborides and the Commissioner for the Environment Mrs. Ioanna Panayiotou.

The Minister of Health in his greeting expressed his support and in particular to the activities of the NCECH and said that investments on Children’s Health are of utmost importance. He welcomed the cooperation established by the three organizations from Cyprus and Austria. He said that the Declaration is an important development with specific and quite important targets. Referring to the issue of EMF/RF he mentioned that it is a potential carcinogen 2b and concluded saying that Prevention is the only choice

The President of the Cyprus Medical Association Dr. Petros Agathangelou highlighted that the Council of Europe, the European Parliament, Medical Associations and many other scientists warned that despite scientific controversies the scientific evidence of serious health impacts due to the exponentially growing exposure to, among others, a potential carcinogen radiation (IARC 2011), is strong enough. We must apply the Precautionary Principle, the legal limits need to be urgently revised, professionals, decision makers and the public need to be adequately informed about potential health impact and new technologies must be adequately controlled for their potential health impact. Finally, he stressed, that it is urgent to minimize the exposure.

The President of NCECH, Dr. Stella Canna Michaelidou highlighted that the realistic approach proposed in the Declaration, combined with adequate awareness raising and education, defines and promotes a framework for rational and safe technology utilization. Technology should be used as a tool and not as a substitute to human relations and in particular of adequate substantial education and relationships with our children.

Dr. Lercher from the Vienna/Austrian Medical Association convened the greetings from the President Prof. Dr. Thomas Szekeres. He stressed that our children are our future and characterized this event and the signed Declaration, as having the potential to raise a strong world wide awareness effect.

The signing of the Nicosia Declaration is a milestone of international importance and very significant for Cyprus, which is contributing substantially to international efforts for understanding potential health impacts from EMF/RF, raising awareness and most importantly in taking effective measures to minimize the risks of the developing technology. The Common Position Paper specifies scientifically evidence based positions and recommendations in how to deal with this serious and complicated Health issue. An issue with wide range implications because of serious risks affecting in particular all children, the new generations but also the entire population.

The main issues raised in the Declaration are :

Potential health Impacts of non ionizing radiation from EMF/RF include carcinogenicity (class 2b IARC 2011), developmental neurotoxicity, effects on DNA, on fertility, hypersensitivity and other serious effects are well documented in peer reviewed studies and occurring at extremely lower levels than existing limits. The fact that fetuses and children have delicate systems that direct the development of human life is reaffirmed. Despite scientific controversies substantial scientific evidence of risks for fetuses and children does exist, indicating damages that could be serious and in some cases irreversible. This evidence is strong enough to support precautionary actions and to establish activities and rules for minimizing exposure as well as careful technology handling.

Abstract of the main suggestions made:

Sixteen recommendations to reduce personal exposure were issued, including that children under age 16 should only use cell phones for emergencies, to use airplane mode and turn off wireless antennas in electronics before handing devices to children, to distance the phone away from the body and use wired connections rather than wireless connections.


These recommendations were based on the existing rules published annually by the Medical Chamber of Vienna, Austria, the Cyprus Committee on Environment and Children’s Health and the recent Reykjavik 2017 Appeal.

DOCUMENTS OF THE NICOSIA DECLARATION

Press Release on the Nicosia 2017 Declaration in English

Press Release on the Nicosia 2017 Declaration in Greek