Environmental Health Trust (EHT) scientists are calling on Google to stop the spread into schools of wireless virtual reality system Global Expeditions Pioneer Program where middle-school children hold a cell phone encased in a cardboard box in front of their eyes to take virtual expeditions to Mars, the moon, and other special places. 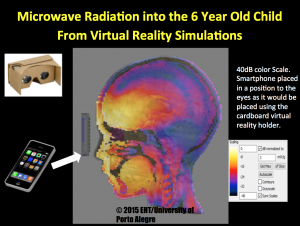 PDF of Scientific Imaging of VR to Children

“Two-way microwave radiation transceivers, in the form of Smartphones, should not be used directly in front of children’s eyes and brains,” cautions University of Utah Distinguished Prof. Om Gandhi, who is one of the original developers of testing to evaluate wireless radiation from cellphones and is a Senior Advisor to EHT.

Prof. Gandhi added, “We have never tested microwave radiating devices directly in front of the young developing eye. The absence of proof of harm at this point does not mean that we have evidence of safety.”

“We want to know why is Google encouraging young children to employ a technology that has never been tested for their use when Samsung has a similar system that explicitly advises that no child under the age of 13 should be using it,” asks Devra Davis, President of EHT, and Visiting Professor of Ondokuz Mayis University Medical School and The Hebrew University Hadassah Medical Center.

“When we began to model cellphone exposures in the brains of toddlers and young children, I never imagined we would see these sorts of uses with devices placed directly in front of the eye and close to the brain,” noted Professor Claudio Fernandez,  whose research employs anatomically-based models of children to modeling cellphone absorption.

Dr. Mary Redmayne, a researcher at Monash University in Australia and EHT Advisor, adds that “Children’s brains are not fully myelinated and eyes absorb radiation readily due to their high water content. Placing a two-way microwave radiating device directly in front of young eyes is not a wise choice in my opinion.”

In the case of the Google Expedition Wireless Virtual Reality System, a smartphone is used in a vertical position directly in front of the eyes of children. Please note the following facts about cellphone radiation:

RECOMMENDATIONS: In light of this scientific information, the Environmental Health Trust recommends that schools forgo experimenting on their students with such wireless virtual reality systems and choose safe radiation-free non-wireless technology for classroom curriculum. Environmental Health Trust recommends Google halt the introduction of Google Expeditions Kits into Schools as no  scientific evidence exists which demonstrates that such radiofrequency doses to children’s eyes are safe.  It is EHT’s opinion that a virtual reality system that places a microwave emitting cell phone directly in front of a child’s eyes and brain could pose a serious health risk to students.  Using a projection of the virtual reality onto the teacher’s wired computer could provide a similar experience without exposing children to this untested radiation.

Googles Expeditions Pioneer Program pilot provides a kit to schools which includes, ASUS smartphones, a wireless tablet for the teacher to act as the tour director, a wireless internet router, allowing Expeditions to run without an internet connection and Google Cardboard headsets. Google is currently providing these kits for free to schools across the country.

My Son Came Home To Tell Me About The Google Pioneer Program at School: 12/2015 Letter From A Mother in Montgomery County Schools