In June 2011, The CDC Drafted Information To Present to the Public On the May 2011 WHO/IARC Group 2B Carcinogenic Classification of Wireless Radiofrequency Radiation and Then Deleted the Information 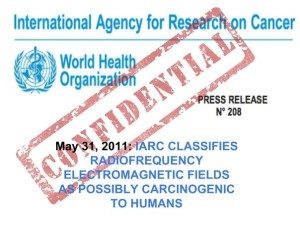 In its review of recently released government documents, EHT has found that the CDC rushed to develop information for its website in 2011 to report that the World Health Organization(WHO) International Agency for Research on Cancer (IARC) had just determined that Radiofrequency (microwave) radiation was “Possibly Carcinogenic,” but did not post this information at that time even though Director of a CDC agency, Dr. Christopher Portier, had led part of the IARC review.
In fact, the CDC website only referenced the IARC/WHO classification three years later in 2014, at which time it also removed information on the increased risk to children and removed advice to reduce exposure to cellphone radiation–even though IARC Director Christopher Wild made such recommendations in 2011.
Wonder what lies behind this delay? Maybe it’s time to ask CDC Director, Tom Frieden, why the agency failed to report on the potential risks of cell phone radiation.

Below please read the June 1 2011 draft of website information and talking points below which never saw the light of day in June 2011. Afterwards please see more of the EHT analysis of this June 2011 decision.

In May 2011  The World Health Organization International Agency for the Research (IARC) on Cancer classified radio frequency (wireless) radiation as a Class 2 B  “Possible Human Carcinogen”. CDC’s Director of the National Center for Environmental Health and Director of the Agency for Toxic Substances and Disease Registry, Dr. Chris Portier chaired the IARC review of the mechanistic evidence as part of the expert working group.

Understanding the importance of the May 2011 IARC Classification of Radiofrequency Radiation as a Class 2 B Carcinogen, CDC officials rush to write new content for the CDC website in order “to update the information with the current IARC meeting release.”

“We need to rush this since our website is out of date.”

“This document will need some “subtraction” before posting on the web”

SPECIFICALLY WHAT INFORMATION WAS DELETED?

The following information was deleted:

Two days later the CDC updated their cell phones and health website but DELETED any discussion of the WHO/IARC Carcinogenic classification and DELETED information about the lethality of gioma, the brain tumor linked to cell phone use. Instead, a diluted version of the initial draft was posted on the CDC website without any mention of the fact that the world’s foremost independent scientific review group had made a new official determination on the strength of evidence showing harm. Could this explain why most people on the street, doctors and even our trusted pediatricians are still in the dark about the WHO IARC’s classification?

FACT: CDC’s 2005-2011 WEBSITE HAD NOTED THE WORLD HEALTH ORGANIZATION’S UPCOMING REVIEW Previous to June 2011, the CDC had a posted webpage on cell phones and health (a webpage which had not changed since 2005).  This 2005 -May 2011 web page specifically referred to the upcoming World Health Organizations review of the evidence stating that “ results should be complete in the next 3-4 years.” How curious that  the CDC decided NOT to share WHO study results  once the review was completed?

FACT: SCIENTISTS SIGNED OFF ON THE MATERIAL

OUR RIGHT TO KNOW

Why was the “general public” DENIED this information? Why was information “subtracted” ? Does the CDC think US citizens are incapable of handling the information about the IARC classification? Why aren’t citizens being fully informed on this issue ? Where is the transparency one would expect from  a government agency tasked to protect public health and safety through the control and prevention of disease?

Download a PDF of the June 1, 2011 CDC Draft that INCLUDES the IARC Carcinogenic Classification by clicking here.

Download a PDF of the posted June 3, 2011 CDC Cell Phone Fact Sheet with the IARC Information Deleted by clicking here.

This is what the CDC posted after deleting the IARC information