Two page California document cautions children and pregnant women just as the University of Pittsburgh Cancer Institute did in 2007. 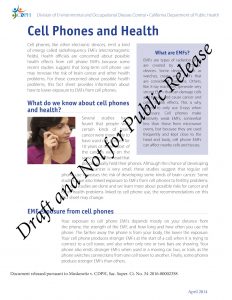 A “Cell Phones and Health” advisory was just released by the California Department of Public Health (CDPH) via a California Superior Court order. The document states, “health officials are concerned about possible health effects from cell phone EMFs because some recent studies suggest that long-term cell phone use may increase the risk of brain cancer and other health problems.” For three years the CDPH refused to release the document to Dr. Joel Moskowitz, a Berkeley Professor,  arguing that such advice would cause “undue panic.” Guidance on cell phones was first issued in the United States a decade ago, in 2007, when the University of Pittsburgh Cancer Institute issued the first US medical warnings about cell phones to the public and even sent a memo to the Cancer Institute’s 3,000 faculty and staff.

“The public has a right to know now who ordered the California Health Department to suppress that simple warning,” stated Devra Davis, PhD, MPH, President of the Environmental Health Trust (EHT) and former Director of the University’s Center for Environmental Oncology issued the cell phone safety advice in 2007 with Dr. Ronald B. Herberman, Director of the University of Pittsburgh Cancer Institute and added that “the American Academy of Pediatrics and Consumer Reports have both issued recommendations to reduce exposure to cell phones along with over a dozen other countries.”

The just released California document recommends people keep the phone away from the brain and body especially for children stating, “EMFs can pass deeper into a child’s brain than an adult’s. Also, the brain is still developing through the teen years, which may make children and teens more sensitive to EMF exposures.” The University of Pittsburgh Cancer Institute’s 2007 advice also details children’s vulnerability and recommends, “Do not allow children to use a cell phone, except for emergencies. The developing organs of a fetus or child are the most likely to be sensitive to any possible effects of exposure to electromagnetic fields.”

In 2015 CDPH denied the request to release the document stating, “In light of the updated guidance issued by the CDC [US Centers for Disease Prevention and Control] in June of 2014, CDPH has chosen not to issue a guidance document on radio frequency EMF and cell phones.”

However, Davis points out that the CDC retracted the June cell phone guidance within three months of issue. The CDC had issued new advice to the public to reduce exposure to cell phone radiation in June 2014 warning that children are more vulnerable stating, “along with many organizations worldwide, we recommend caution…If RF does cause health problems, kids who use cell phones may have a higher chance of developing these health problems in the future.”

However, by August of 2014, this and other language was removed because, according the internal CDC documents obtained by EHT, “We thought the struck language was hard to understand,”and the CDC website was reworded to state that, “some organizations recommend caution in cell phone use. More research is needed before we know if using cell phones causes health effects.” The statement on children disappeared.

“Why didn’t the California Department of Health move to issue guidance after the CDC retracted their cautionary advice? The CDC not only retracted the clear advice to reduce exposure, but also eliminated information on children’s higher risk and also eliminated information on the research evidence indicating increased brain cancers in heavy cell phone users which largely resulted in the International Agency for the Research on Cancer’s classification of wireless as a possible carcinogen,” stated Davis who also pointed out that an industry consultant was hired by the CDC to consult on their non-ionizing radiation website content in 2014.

In 2010, health professionals in the Environmental Health Investigations Branch of California Department of Public Health prepared a cell phone guidance document that summarized the science regarding the health risks from cell phone radiation and provided precautionary recommendations to the public for limiting personal exposure. Dr. Joel Moskowitz, Professor at University of California Berkeley School of Public Health learned of the document in 2013 and submitted several formal requests for the document under the California Public Records Act (CPRA) starting in January 2014 but was denied.

The Environmental Law Clinic at the University of California, Berkeley Law School and the First Amendment Project represented Dr. Moskowitz pro bono and filed a lawsuit for the document’s release in May 2016, with the Superior Court of the County of Sacramento California.

In February 2017, Judge Shellyanne Chang issued a ruling which over-ruled eight of the nine objections submitted by the Attorney General and directed CDPH to release the “Cell Phone and Health” Guidance documentation.

In response to CDPH’s argument that disclosing the document would cause “undue panic and unnecessary doctor or medical visits,” Judge Shellyanne Chang stated, “This concern is paternalistic. The public has a right to be informed of the health risks associated with activities so that the public can make informed decisions before participating in those activities.”

In a 2017 International Conference of the Israel Institute for Advanced Studies held at Hebrew University, Dr. Anthony Miller— long-term advisor at the World Health Organization’s IARC, and advisor to Environmental Health Trust detailed the current epidemiological research on long-term cell phone users and stated that his overall conclusions are that “the evidence has increased” and “radiofrequency fields should be considered a probable cause of human cancer.”

Davis points out that “the government was informed on the need for precautions a decade ago.”  In 2008 Dr. Ronald B. Herberman testified to a Congressional Subcommittee on cell phone radiation stating, “I recognized that there was sufficient evidence to justify the precautionary advisories that had been issued in other countries, to alert people about the possibility of harm from long-term, frequent cell phone use, especially by young children. Then, Dr. Davis and I consulted with international experts in the biology of radiofrequency (RF) effects and the epidemiology of brain tumors, and with experts in neurology, oncology and neurosurgery at UPCI. Without exception, all of the experts contacted confirmed my impression that there was a sound basis to make the case for precaution.”

2008 Memo of Dr. Ronald B. Herberman, Director of the University of Pittsburgh Cancer Institute: Important Precautionary Advice Regarding Cell Phone Use

Frequently Asked Questions about Cancer and the Environment