A 2017 analysis of over 40, 000 men in 50 countries found a 52.4% sperm decline in men from  North America, Europe, Australia and New Zealand. Environmental exposures from plastics to chemicals to cell phone and Wi-Fi radiation are likely an important reason for this decline. Animal studies in female animals have found impacts to ovaries and the female reproductive system as well.

Consistent evidence from experimental research, epidemiological studies and in vitro (cells) laboratory, and in vivo (animal) studies shows that the radio frequency radiation exposure from wireless devices is associated with men’s reproductive health issues including: 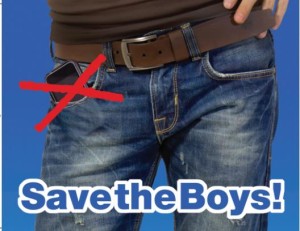 “Our results indicate that exposure to RF-EMF produces increases in testicular proteins in adults that are related to carcinogenic risk and reproductive damage. In light of the widespread practice of men carrying phones in their pockets near their gonads, where exposures can exceed as-tested guidelines, further study of these effects should be a high priority.” 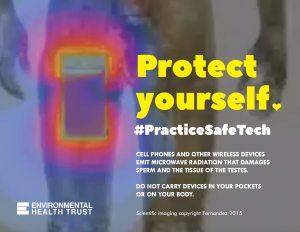 Cell phones have also been linked to erectile dysfunction (ED). In a 2013 study published in the Central European Journal of Urology, men with ED carried switched-on cell phones for longer periods of time (average of 4.4 hours daily) than men without ED (average 1.8 hours daily).

“The epidemiological studies of men assessed for infertility were consistent in demonstrating decreased sperm motility associated with increased use of mobile phones” and “biological effects on sperm motility related to RF exposure”.

—The BC Center for Disease Control 2013 Report, A Radiofrequency Toolkit for Environmental Health Practitioners.

Environmental Impact on Semen Quality – What is the Role of Non-ionizing Radiation? Lecture by Hagai Levine, MD

What Men Can Do

All device manufacturers advise that each device should be held at some distance away from human bodies and brains. Turn the Power OFF on phones, tablets, Mp3 players etc, before they are placed in a pants pocket, suit jacket or tucked into clothing.

For phone (landline), internet, printer and entertainment gear, connect by cord or cable with all wireless features off. Turning off your Wi-Fi at night reduces your exposure significantly. However if you have Wi-Fi on during the day (especially with the router near your body in your office) you could be getting daily significant exposure. Installing fully wired systems eliminates this source completely.

Keep wireless devices away from your lap! Do not place your cell phone, laptop or tablet on your lap. Decrease your exposure by increasing your distance from emitting sources. Remember that even if a device is not in use, it will still emit regular short bursts of microwave radiation.

4. Turn It Off When Not in Use

When you must use a mobile phone, put in Airplane mode/Wi-Fi OFF when not in use and use a speaker phone, headset or a plug-in earpiece. When you use your cell phone do not rest it near your body. Trade in your home cordless phone for a good old fashioned landline with a wired handset and use that more often. Remember that children should not use mobile phones except in emergency.

Power OFF in vehicles. Mobile devices distract us and a split second is all it takes. In terms of radiation exposure, they emit higher power radiation during travel and the metal surroundings create radiation hotspots. If your cell phone is on, do not rest your cell phone on your lap while driving. Place it as far away as possible.

“In this study, we reviewed structural and functional proteomic changes related to EMF exposure. Reported changes are categorized based on main affected tissue and also the most important adverse effects. Overall, these results demonstrate significant effects of radio frequency-modulated EMF exposure on the proteome…”

Exposure to wireless radiation has a cumulative effect. Each time we can make the choice to reduce radiation it makes sense. Sometimes we have a choice and sometimes we don’t. If you  make these simple changes you can reduce your exposure significantly.

Please share this information with your friends and family and learn more ways to reduce exposure.

The effects of radiofrequency electromagnetic radiation on sperm function

Effect of mobile telephones on sperm quality: A systematic review and meta-analysis

Effects of the exposure to mobile phones on male reproduction: a review of the literature.