Despite repeated legal challenges, Berkeley’s Right to Know Law about Cell Phone Radiation takes effect this month.  To celebrate this long-awaited development, Environmental Health Trust has released the new E-Book Show the Fine Print that details fine print advisories embedded in the manuals of all cell phones and other wireless devices such as baby monitors,  printers, cordless phones, wireless routers and gaming consoles. 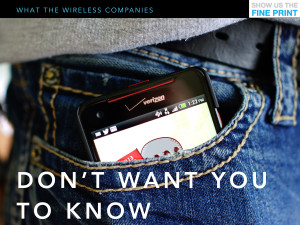 Berkeley’s new Cell Phone Radiation Right To Know Ordinance  went into effect on March 21, 2015.  In remarks to the council prior to the unanimous passage of the law, City Councilmember, Max Anderson, who championed the Right to Know law said, “The real issue before us tonight is whether or not citizens have the right to information which they can rely on to make decisions. You see a hunger for this information.”

Led by the pro bono defense of Larry Lessig, Harvard Constitutional Law Professor and Robert Post, Dean of Yale Law School, the city prevailed against prolonged industry efforts to block the law.  In his testimony to the council, Lessig pointed out, “This ordinance is not about a scientific debate. It is simply about giving Berkeley citizens the information they need to make choices about how they use their cellphones.”
For over five years, EHT’s President, Dr. Devra Davis has worked on Berkeley’s Cell Phone Right To Know testifying at several key Berkeley City Council hearings and working closely with Dr. Joel Moskowitz, Director of University of California Berkeley’s Center for Family and Community Health, and Ellen Marks, founder of the California Brain Tumor Association, as well as Renee Sharp of the Environmental Working Group, and Prof. Stanton Glantz of the University of California San Francisco, to support better public understanding about how and why to practice safe technology.   A predecessor effort by the City of San Francisco is profiled in Davis’ award-winning book, Disconnect: the truth about cell phone radiation.   Historic footage from the Berkeley Council cell phone hearings of 2015 and 2011 is posted on EHT’s Youtube page.
Dr. Davis Testifies on Berkeley’s Historic Cell Phone Right To Know Ordinance
Following its own scientific review, Consumer Reports in November of 2015 advised that  consumers keep cellphones out of pants and short pockets in order to keep radiation levels below the tested limits.

Davis pointed out that, “Advisories for Laptops, routers, baby monitor and cordless phone base stations explicitly state these devices should be held at 20 cm or about 8 inches away from the body.  Yet it is not uncommon for young school children to hold laptops close to their bodies for hours a day.”

Dr. Davis Testifies on Berkeley’s Historic Cell Phone Right To Know Ordinance
In her remarks to the Council, Davis noted,  “Democracy rests on the freely given consent of the governed.  Where information is withheld, democracy is endangered.  People need to know and have a right to know this information so that they can determine whether and how to protect themselves and their families.”

In his testimony to the Council, Prof. Glantz concluded that “A cell phone in your pocket or lap emits levels of radiation that can damage human sperm.” He added that “I do not recommend this as a form of male birth control, but it certainly does and can have an impact on a man’s ability to become a father.”

Stan Glantz speaks on cell phone radiation at the Berkeley City Council
The advisory distance hidden in manuals of all smart phones and other wireless transmitting devices corresponds to the tested distance for radiation compliance, employed before allowing these devices to be sold. Keeping phones directly against the body exceeds government radiation thresholds, which protect users only from getting too hot.  For cell phones, the fine print instruction typically states a distance of under an inch–as this is how phones are tested today.

“Consumers should also be aware that even if they follow these instructions, they may not be adequately protected.  These safety warnings were never designed with children in mind. Testing applies to a large adult man with a big head. A child’s brain is cased in a thinner skull; that’s one reason they absorb more microwave radiation. Research on long term use of cell phones is indicating several serious health risks. Cell phones are not toys.” advises Dr. Davis.

All cell phone retailers in Berkeley are now required to post or hand out fliers that state:

“To assure safety, the Federal Government requires that cell phones meet radio frequency (RF) exposure guidelines. If you carry or use your phone in a pants or shirt pocket or tucked into a bra when the phone is ON and connected to a wireless network, you may exceed the federal guidelines for exposure to RF radiation. Refer to the instructions in your phone or user manual for information about how to use your phone safely.”

In addition to the new E Book, EHT’s website hosts information on the science and policy issues of cell phone radiation. Additionally, EHT hosts the website Show the Fine Print where users can find the fine print advisory on various phone models.