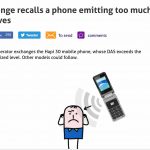 See a translation below of the article “Orange recalls a phone emitting too much radiation” in 60 Millions Mag April 4, 2018


The operator is exchanging the Hapi 30 cell phone whose SAR exceeds the level authorized.  Other models could follow.This is an unprecedented situation.  A mobile phone is currently being recalled because of the level of exposure of electromagnetic radiation to which its users are being exposed.It concerns the Hapi 30, a rather basic flip phone model that the operator Orange sells under its own brand name and is manufactured by the French company Mobiwire. Tens of thousands of consumers affected


In mid-March, Orange began to warn the affected users, that is, 0.3% of its customers, according to the operator, which would represent around 90,000 persons.  By letter, they are being offered a free exchange of their cell phone against another model.It is the controls conducted by the National Frequencies Agency (ANFR) that detected a specific absorption rate (SAR) that exceeds the authorized limit.  The SAR is the measurement used to quantify the energy of radiofrequency radiation absorbed by the user of a cell phone. It is limited to 2 W/kg at the level of the head (“SAR head”) and at the level of body (“SAR trunk”).


The Orange mobile phone Hapi 30 exceeds the limit at the level of the trunk (2.1 W/kg).  According to the letter of the operator, this occurs only “in the case of a rare use:  sending an MMS covered by the 2G network, while the flap of the phone is closed and is in contact with the body”.The operator seeks to be reassuring: « This mobile phone presents no health risk”, reassures a spokesperson, insisting on the fact that it meets the emission standards in situations of ordinary use, when the flap is open.Other cell phones outside the standards?


Recalls of this type could be repeated because the National Frequencies Agency has strengthened its action of control of mobile phone emissions.We have recorded some other phones that exceed limits, revealed Gilles Brégant, Director-General of ANFR.  Contradictory procedures are in progress with the manufacturers.”  He promises to publish the name of the models at the conclusion of the procedure, which would take several months.The action of a physician


For several months, the public body has sufficient powers to sanction, in accordance with the European directive 2014/53/EU called the RED directive.  It can for example impose fines on cell phone manufacturers that do not respect emission standards.

The strengthening of controls is also the result of the activism of Marc Arazi, a physician, former local politician, who wants to warn about the risks of electromagnetic waves.  He has taken actions, including in court, to obtain more transparency of the SAR measurements carried out by ANFR.

These standards have also been made stricter.  A change in the method of measurement, which applies to smartphones and other cell phones placed on the market since April 2016, has led to the emission measurements of the trunk at a maximum distance of 0.5 cm from the body.

Previously, manufacturers could make measurements at a distance of 2.5 cm.  These few centimeters change everything: they were allowing manufacturers to display much lower values, and therefore to comply more easily with the standards.

Original article in French:
https://www.60millions-mag.com/2018/04/04/orange-rappelle-un-telephone-emettant-trop-d-ondes-11701
Read more about #Phonegate and the French tests that show cell phones emit radiation far far gigher than government limits at this page on Phonegate.