Yes Cell Phones Cause Cancer: This is How You Reduce Your Cell Phone Radiation Exposure

We also recommend watching lawyer Jimmy Gonzalez talk about the cancers he developed after cell phone use as a lawyer. He developed cancer in his brain (on the side he held the phone to his ear), hand (on the hand he used to hold the cell phone) and chest (right under where he carried the cell phone in his shirt pocket.) 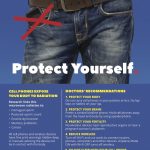 “Keep Phones Out of Your Pants” EHT Poster

New EHT Posters: These can be printed in color on regular sized paper.

Two sided cell phone radiation reduction postcards and other materials can be found at the EHT webpage which has several other printable resources.

The public service video below explains how people can reduce exposure to radiofrequency radiation exposure with simple steps.