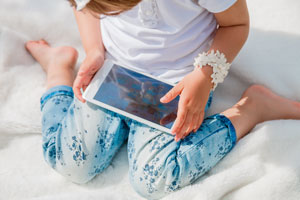 iPads and Tablets Emit Microwave Radiation: Wireless iPads and tablets emit constant bursts of pulsed wireless microwave radiation also known as radiofrequency (RF) electromagnetic radiation. Microwave bursts can be happening about every 4 seconds or up to 900 times every hour.

Tablets have up to 5 transmitter antennas emitting radiation as a beacon signal that transmits even when the internet is NOT being used. Yes, the radiation intensity is stronger when you are using the internet with a Wi-Fi connection, however, the radiation does not automatically stop when you work offline. The bursts continue because the tablet antennas “check in” with what is called a “digital handshake” to the base network which is usually a Wi-Fi router or hotspot, or a nearby cell tower. If the network signal strength is low then the tablet’s radiation burst is higher. This digital handshake continuously repeats.

The American Academy of Pediatrics, which is the largest organization of pediatricians in the United States, has repeatedly warned of children’s greater vulnerability to this wireless radiation and recommends that families reduce exposure. For example, one of their Ten Tips to reduce exposure includes, “If you plan to watch a movie on your device, download it first, then switch to airplane mode while you watch in order to avoid unnecessary radiation exposure.” Worldwide  many medical organizations are cautioning the public to minimize wireless exposures. The New Jersey Education Association, and the Maryland State Expert Council on Children’s Environmental Health Protection recommends reducing exposure in classrooms.

The Radiation is Linked To Cancer

The International Agency for Research on Cancer of the World Health Organization classified radiofrequency as a Class 2B Possible Carcinogen in 2011, and since that date scientific evidence has increased so much that long-time advisors to the World Health Organization are calling for a reclassification-  to Class 1 Human Carcinogen. The $25 million US National Toxicology Program study has linked radiofrequency radiation exposure to cancer, replicating findings of the same tumor types in human studies. DNA damage was also found.

The Radiation Is Linked To Serious Biological Effects

Peer reviewed studies also have found a myriad of other problems from increased headaches and sleep problems to damage to reproduction and brain development. For example, studies have found that Wi-Fi radiation damages sperm, even at very low doses. Rats exposed to wireless had more damaged brain cells than unexposed rats. Connections between this radiation and autism and ADHD have lead to doctors advising reduced exposure in schools nationwide. Doctors are very concerned about the health effects after years of daily exposure to this radiation, especially for children.

A published review of effects of Wi-Fi radiation entitled, “Wi-Fi is an important threat to human health” found that “repeated Wi-Fi studies show that Wi-Fi causes oxidative stress, sperm/testicular damage, neuropsychiatric effects including EEG changes, apoptosis, cellular DNA damage, endocrine changes, and calcium overload. Each of these effects are also caused by exposures to other microwave frequency EMFs, with each such effect being documented in from 10 to 16 reviews.” The paper concludes that, “it follows from these various findings that the placement of Wi-Fi into schools around the country may well be a high level threat to the health of our children as well being a threat to teachers…”

Most people are unaware of the fine print FCC safety warnings in all wireless devices that state the consumer should be a specific distance away from the device to ensure the radiation levels do not exceed FCC limits.  When iPads first appeared on the market, the iPad user manual stated, “Orient the device with the cellular antenna (located under the black edge at the top of the device) away from your body or other objects…“ to avoid exceeding FCC standards. Similarly, many other tablet models advise “avoiding direct contact with the transmitting antenna” and/or placing “the antenna away from your body.”

Wireless Radiation From iPads and Tablets Penetrates Into The Body

When children hold iPads at their bodies, the radiation penetrates into the children’s organs, usually their reproductive organs when the device is on their lap. Research has shown that radiation also penetrates into children’s brains with higher intensity exposures when the device is closer. Many children will lay down on the floor with a tablet very close to their face, exposing their eyes and brain.

Many iPads and Tablets Can Be Used Without Wireless Exposures

If you follow some simple steps you can easily turn OFF the wireless antennas on most tablets and still remain connected to the internet. You simply use a cord plugged into the tablet with an ethernet connection and adapter. Then make sure that you also turn OFF the Wi-Fi antennas of the device in the settings (otherwise your tablet will continue to emit microwave radiation).

You also can have everything already downloaded so that you can use the various applications on your tablets without connecting to the internet. for example, you can tae pictures, video, do drawings and other activities on the device without needing the Wi-Fi.

If you need to use Wi-Fi, we recommend that children are at a distance from the transmitting device- and not present during wireless downloading.  Then turn OFF all wireless settings before a child uses the device. We encourage you to set up wired (not wireless) ethernet connections throughout your home so that everyone can access the internet without radiation exposure.

Yes, Most iPads and Tablets Can Connect to the Internet With A Wired Connection

Wi-Fi is not necessary for connecting to the internet. Tablets can connect to the internet by an ethernet cord plugged into any standard router or modem, however, depending on the make and model, you may need a few easily available small components. The exact adapters required may change and you can contact the manufacturer or other expert suppliers to be sure you have the correct pieces for your exact model.

This video from the informative blog “It Takes Time” by Andrea Fabry shows how to connect an iPad to the internet using ethernet.

Andrea details the required accessories for most apple devices.

For many tablets all you need is a USB-to-Ethernet adapter. However, connecting the ethernet cord can vary depending on the make and model of your tablet. If your tablet has a mini-USB port you may need one more adapter to convert the mini to full USB. It is worth the time and small bit of effort to take these steps. The article “How to Connect Ethernet to a Tablet” details how to connect your iPad, Microsoft Surface Pro, and most Android tablets. Unfortunately there are some tablets that are unable to connect using ethernet, even with adapters. Always check to ensure you can use an ethernet first. We do not recommend purchasing a tablet unless you are sure you can use it NON-wirelessly.

It is important to separately check the antennas to ensure ALL of them are turned OFF.

Putting an iPad on ‘airplane mode’ will initially turn off all antennas, however, Wi-Fi and Bluetooth antennas can be re-activated without switching off the airplane mode. An iPad showing ‘airplane mode’ is not a guarantee that all the antennas are off. In addition, when the Wi-Fi function on an iPad shows “Not Connected,” it does not mean the antenna is off, it only means the iPad is not logged onto any available network — the Wi-Fi antenna is still constantly emitting microwave radiation.

An additional note: Remember to always keep the tablet off the lap — even if the wireless antennas are turned off. Tablets and laptops also emit another type of electromagnetic fields (EMF) called ELF EMF that penetrates into children’s and adults’ bodies with highest exposures directly near the device. This type of EMF is different than the RF EMF but also linked to cancer and other biological effects. So you always want to respect the need for a distance between you and the device or any handheld computer.

What Parents Need to Know About Safe Technology Factsheet

Green Gazette Article: iPads: How Safe Are Our Children?

Do’s and Don’ts for Safe Technology