What Does the EPA State About the Safety of Cell Phones and Wireless Technology?

This page contains a list of recommendations, reports and letters by the EPA on electromagnetic radiation.

​In 2014 a parent in Texas wrote the EPA about chronic exposure to cell tower radiation and got the following response;

“The standards ….are not intended to address low-intensity (non-thermal), long-term (chronic) exposures. Investigation as to whether there may be effects from exposures too low to cause heating is continuing.”

and “telecommunication service providers and device manufacturers having little more to tell people except “don’t worry.”

Prior to 2014, the  EPA was informing the public that the question of safety was not resolved and an open question. Then in 2014, this text was deleted and the new webpage text uses the word “low” and seems to imply that safety questions are not a concern.

Up until August 2014 the EPA website stated the following

“Wireless technology is still relatively new, and world-wide, researchers continue to study the effects of long-term exposure. To date, the scientific evidence linking long-term use of cell phones to cancer or other health effects is not conclusive. More research is needed to clarify the question of safety. “  -Read A PDF of the pre 2014 EPA webpage HERE.

Then the EPA Webpage was changed in August 2014 to say…

“Scientists continue to study the effects of long-term exposure to low levels of RF. If you are concerned, you can take these simple steps to reduce exposure to RF radiation:

-The Current EPA Webpage as of 8/20/14, The Full Text of the EPA Website in PDF form Here

EPA’s Norbert Hankin penned the federal RFIWG’s second letter on concerns about RF human exposure guidelines with three additional issues.; the sensitivity of different tissues to temperature; that a relaxation of  standards will allow for higher exposures; and that the pinna- or ear-  is being considered an extremity and will be allowed far higher RF limits without considerations of different body sizes.

To our knowledge neither the 2003 or 1999 letter were ever responded to. Read the 2003  Interagency Radio Frequency Workgroup’s Letter to CK Chou on RF Exposures.

2002 EPA Letter about the Inadequacy of the FCC guidelines. 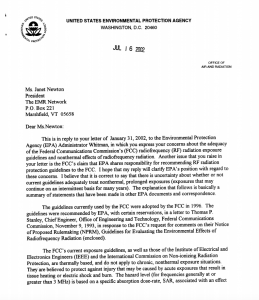 “The generalization by many that the guidelines protect human beings from harm by any or all mechanisms is not justified.”

-Norbert Hankin,  lead scientist of the EPA Center for Science and Risk Assessment Radiation Protection Division, states in this letter that the current FCC human exposure limits, “are thermally based, and do not apply to chronic, nonthermal exposure situations” and that an understanding of the impact on sensitive populations such as children, pregnant women and the elderly still needs to be done.

In this letter, members of the   RFIW identity several critical  issues with the RF exposure guidelines. Their concerns include the need for a biological basis for SAR limit and they point out that the limits for brain and bone marrow should be lower than those from muscles and fat as tissues are not equally sensitive. They question the selection criteria for the adverse effect and state there is extensive data on acute effects but that the lower-level non-thermal chronic exposure effects may be very different and chronic effects need to be accounted for.  They state the uncertainties in the data should be addressed. “These studies have resulted in concern that exposure guidelines based on thermal effects, and using information and concepts (time-averaged dosimetry, uncertainty factors) that mask any differences between intensity-modulated RF radiation exposure and CW exposure, do not directly address public exposures, and therefore may not adequately protect the public.”  Read the 1999  Federal Radio -Frequency Interagency  Workgroup (RFIW) Letter to Richard Tell

The EPA Radiation Division that was engaged in research and developing safety standards to protect the public from thermal and non-thermal biological effects. These activities were defunded.

“The Senate Committee on Appropriations has cut $350,000 from the Environmental Protection Agency’s (EPA) EMF budget, because, “The committee believes EPA should not engage in EMF activities.” In a September 13 report (No.104-140), the committee also stated: “Section 2118 of the Energy Policy Act of 1992 established a federal program to investigate and report on human health effects from [EMFs]. Congress mandated that this program of research and public communication be managed jointly by the Department of Health and Human Services and the [DOE]. No programmatic role was assigned to EPA, yet EPA has pursued a number of unintegrated activities on EMFs that are of questionable value.” The House committee has already announced plans to cut EPA’s low-priority radiation programs, which would include its work on EMFs (see MWN, J/A95).”

The Congressional Record: Calendar No. 185 – Congress.gov

These actions resulted in halting the EPA development of safety standards. Thus, the US does NOT have safety standards in place. Instead the US adopted guidelines created by industry tied groups of the  IEEE, and  NCPRP. For example, the Co-Chair of the IEEE subcommittee was CK Chou, Chief Motorola Scientist. 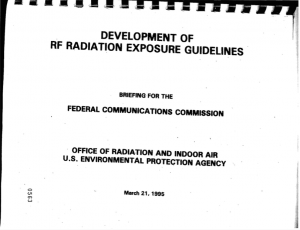 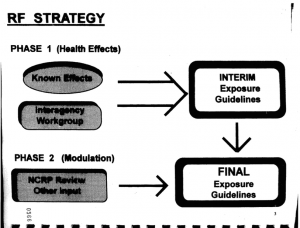 In this powerpoint presentation, the EPA briefs the FCC and NTIA about their progress in developing human exposure guidelines- that consider thermal AND nonthermal effects for microwave radiation. The EPA was in a two phase process. First they were setting “interim RF radiation guidelines” which “did not account for modulation, chronic exposure or non thermal effects.” Then they were going to focus on “modulated and nonthermal exposures” in Phase 2 by convening national experts. A year later, the EPA was defunded from RF work and standards were never set. EPA Briefing To the FCC and NTIA on EPA “Development of RF/MW Radiation Guidelines”

1995  EPA Letter to the FCC on Near Completion of EMF Guidelines: The EPA updated the FCC on their progress in developing safety standards to cover thermal and non-thermal effects in this letter.

The EPA states that certain subgroups are more at risk (pregnant women, children and the elderly) and calls for an  updated, comprehensive review that considers the biological effects of RF, specifically pointing to the need to update the NCRP Report 86 (Note: NCRP 86 is still the basis for US regulations according to the FCC  and has not been updated to include biological effects).

“The FCC should not adopt the 1992 ANSI IEEE standard there are serious flaws in the standard that call into question whether the proposed use the 1992 ANSI IEEE is sufficiently protective.” The report also states that “the claim of protection for all persons from all interactive mechanisms”  has “not been supported”.  Read the letter and comments  here.

When this report was first drafted, the team recommended that power-frequency EMFs should be classified as “probable human carcinogens” and that RF/MW radiation be considered a “possible human carcinogen.” However, this review remains a “Draft only” as it was never finalized. The Report was prepared to review and evaluate the available literature on the potential carcinogenicity of electromagnetic fields. With respect to human epidemiologic studies, the EPA found of the strongest link between exposure to 60 HZ magnetic field and human cancer. Consistent modest elevations of cancer risk for leukemia, cancer of the central nervous system and lymphoma were found in children whose exposure to magnetic fields was estimated at two MG or higher. These studies estimate a potential 1.5 to 3 increase in cancer risk from elevated magnetic field exposure as defined by wiring codes. 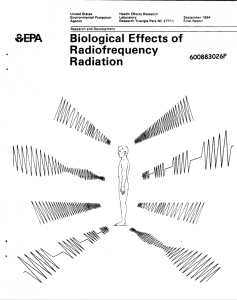 “The objective of this report was to summarize and evaluate the existing database for use in developing RF radiation exposure guidance for the general public. The frequency range covered in this document is .5 MHz to 100 GHz. The existing database provides sufficient evidence about the relation between RF radiation exposure and biological effects to commit development of exposure limits to protect the health of the general public. It has been concluded from this review that biological effects occur at SAR up to about 1 W/kg some of them may be significant under certain environmental conditions.”

Read the 1983 Project summary of the EPA  Bioeffects research here.

1984: US Science Advisory Board (SAB) Recommendation to the EPA To Develop RF Guidelines: 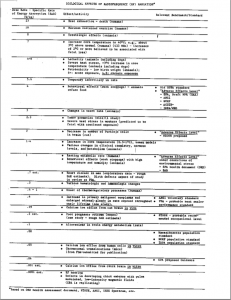 In this letter, the  SAB Board recommends that the EPA develop radiation protection guidance to protect the public. The report contains a 1983 letter from FCC Chairman Mark Fowler to the EPA Administrator Kathleen Bennett  which states, “We believe that a definitive federal standard is imperative. Therefore we would like to make clear our support for your guidance development. We encourage the EPA to complete this process as expeditiously as possible so that her uniform federal standard will be available for use by the FCC and other affected agencies.”

Page 30 lists Biological Effects and has the EPA Proposed Guidance level at .04 W/kg

Read the US Science Advisory Board (SAB) Recommendation to the EPA To Develop RF Guidelines:

EPA “Radiofrequency Radiation Levels and Population Exposure in Urban Areas of the Eastern United States”
The EPA looked at RFR levels in various spots in 7 metro areas:  Boston, Atlanta, Miami, Philadelphia, NY, Chicago, and Washington DC, and found that the RFR levels generally fell below  1 microwatt/ cm2.
1973 EPA Environmental Exposure to Non-ionizing Radiation Report.
Of particular interest is pages 47 – 68, written by Richard A. Tell for the U.S. Environmental Protection Agency (EPA) Office of Radiation Programs where he states;
“The fact that electromagnetic energy in the radiofrequency and microwave portions of the spectrum can induce dangerous effects on human tissues when applied with sufficiently high intensity has been known for many years. With the invention of radar in 1935 and its rapid development and deployment during World War II, it became common knowledge among radar workers that microwave frequencies could interact with tissue leading to significant heating, depending upon the relative heat dissipation capabilities of the particular part of the anatomy exposed. Warnings about the possible induction, from over exposure, of cataracts of the eye and temporary sterility became commonplace. Since those early days of microwave hazard concern, the expanded use of radiofrequency, or RF, and microwave energy for various applications such as widespread communications systems and industrial operations has elicited a new and more critical concern over the possible health implications of this form of nonionizing radiation. This new concern is with low level exposure….”