The SAR Test Is Inadequate

The SAR Test Is Inadequate

Why do scientists state that SAR is inadequate to protect cell phone users?

There are three major problems with the SAR laboratory compliance tests: (1) the models, (2) the method, and (3) the limits.

SAR is not an adequate metric for understanding a person’s exposure as the test method is not representative of the actual people (from babies to adults) who use cell phones. The SAR test dummy is based upon a large adult male (6’2” tall and 220 pounds) called the Specific Anthropomorphic Mannequin, or SAM. 97% of the population is smaller than the SAM model, meaning that only 3% of cell phone users are represented. Research confirms that radiation absorption into a child’s head can be over two times greater, and absorption into the skull’s bone marrow can be ten times greater than adults. 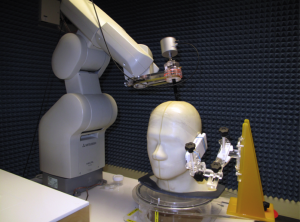 The SAM head and body phantom is filled with a homogenous liquid. This liquid is not representative of the human body, which has dozens of different tissues—from eyes to muscles to bones—each of which has different electrical properties. Radiation moves in a more uniform fashion through SAM’s homogeneous liquid but does not move the same way though human tissues, which vary in thickness.

Scientists are concerned due to research that has shown in real mammal brains that cell phone radiation ricochets through the tissues and can form hotspots. Furthermore, the SAR laboratory compliance tests do not integrate various internal (e.g., piercings, metal implants) and external environmental factors (e.g., eyeglasses, metal walls) that could further impact the radiation absorption in a human body.

SAR Test Positions Do Not Reflect Actual Use Patterns

Manufacturers are not required to test cell phones in positions of direct contact to the body. A person who obtains a cell phone more than likely will use the cellphone in various positions where the phone is touching the user’s body. Common body contact positions, such as placing the phone in a pocket, are not tested before a cell phone is allowed on the market.

During laboratory tests, the temperature probe takes measurements in a grid pattern inside the SAM model and averages the numbers. Averaging substantially lowers the reported temperature. For example, the SAR is highest in tissues near the phone’s antennae and lower further away. Peak SARs can be quite high but are not documented by the manufacturer. Instead the numbers are averaged together. SARs are averaged over a 1 gram volume or a 10 gram volume, again substantially impacting the final SAR number. When a value is averaged over the 10 gram volume, the final reported SAR is lowered even further. Thus, SAR averaging calculations mask peak radiation exposures to human tissue.

Inadequate Limits: SAR Limits Do Not Protect the Public from Adverse Effects

Most importantly, the SAR limits of 2.0 W/kg and 1.6 W/kg are too lenient and allow radiation exposures that have been shown to have adverse effects in hundreds of peer reviewed published studies.

The SAR test is only relevant to heating effects of cell phone and wireless radiation. SAR limits do not consider the large amount of scientific evidence that indicates heating is not the only harm from cell phone radiation. Seemingly “low” cell phone radiation levels (far below SAR limits) that do not induce measurable changes in heat can have adverse impacts on biological systems. Cancer, reproductive damage, neurodegenerative diseases, enhanced production of damaging free radicals and reactive oxygen species, membrane weakening, and damage to heat shock proteins are all non-thermal effects that have been found to occur following cell phone radiation exposures at levels far below SAR regulatory limits. SAR limits do not adequately protect public health.

For all of the reasons noted above, over 200 scientists have taken part in the EMF Scientist Appeal and have called for the urgent development of EMF guidelines that are more protective. In the United States, the American Academy of Pediatrics (the nation’s largest group of over 64,000 pediatricians and pediatric specialists) has urged the FCC to update US outdated cell phone testing methods and stated, “The current metric of RF exposure available to consumers, the Specific Absorption Rate, is not an accurate predictor of actual exposure.”

SAR Tests Can Have a 30% Margin of Error

On September 9, 2016, Swankin & Turner sent a letter on behalf of the National Institute for Science, Law & Public Policy and the Environmental Health Trust to the US Federal Communications Commission about the fact that the SAR tests have a margin of error.  FCC test methods have a known margin of error (uncertainty factor) which is plus or minus 30%. This means that “over as many as 75% of cell phones in use today could be over the FCC limit.”

Examples of how various popular phone brands, and wireless transmitting devices such as tablets, may easily exceed the FCC’s limit, with high SARs  were included with the letter. The letter remains unanswered by the FCC

A 30% plus or minus factor is a lot when it comes to our bodies’ exposure to radiation. Read the Inquiry letter to the FCC.