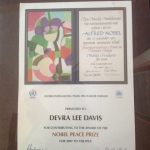 In 2007 Al Gore was awarded the Nobel Peace Prize alongside the large team of scientists who were part of the Intergovernmental Panel on Climate Change (IPCC).  Devra Lee Davis PhD, MPH, was part of the IPCC team as of the lead authors on their assessment of climate mitigation policies (1999-2005).

“In 1997, for instance, shortly before the UN’s Kyoto Protocol Climate Conference, she was working as a consultant to the World Health Organization. The conference, she realized, could help raise awareness of the potential health dangers of fossil fuels. Correlating the amount of coal soot in the air with bronchitis and early deaths, she and about 30 colleagues estimated that there were 700,000 avoidable deaths annually. They predicted that, if coal fuel continued at current levels, the death toll would rise to about 8 million by 2020. She was a lead author on the paper, published in Lancet and distributed at the Kyoto conference, where Vice President Al Gore became aware of it. The paper ultimately ended up in the Intergovernmental Panel on Climate Change report for which Gore and thousands of scientists, including Davis, received the 2007 Nobel Peace Prize.”

Global, Regional, and National Costs and Ancillary Benefits of Mitigation,

The Intergovernmental Panel on Climate Change

(IPCC) is the leading international body for the assessment of climate change. It was established by the United Nations Environment Programme (UNEP) and the World Meteorological Organization (WMO) in 1988 to provide the world with a clear scientific view on the current state of knowledge in climate change and its potential environmental and socio-economic impacts. The Intergovernmental Panel on Climate Change work is shared among three Working Groups (1. Physical Scientific Aspects, 2. Consequences and Vulnerability of Socio-economic and Natural Systems, 3. Mitigation)  a Task Force and a Task Group. Read More.