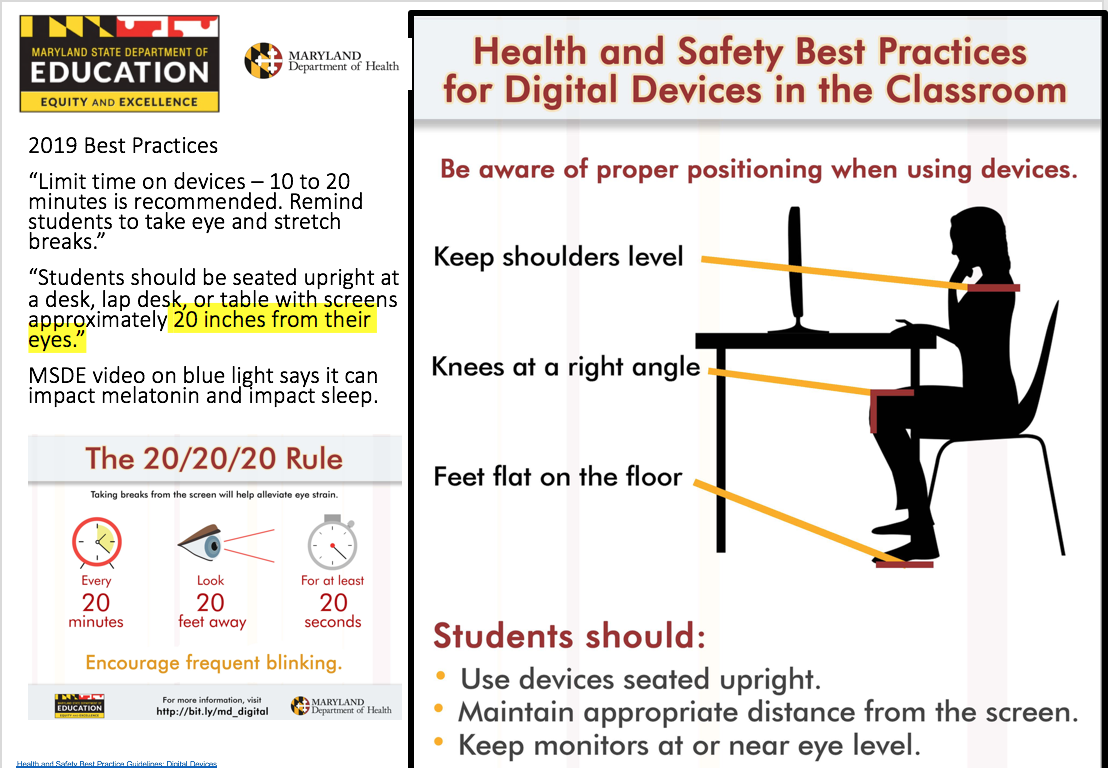 The Maryland State Department Of Education (MSDE) has issued the first of its kind US state guidance for “Health and Safety Best Practice Guidelines: Digital Devices.” However, health advocates who pushed Maryland to develop the guidelines state the final product is “watered down” and lacks adequate protections as it does not educate on protecting from the physical health risks of blindness from the blue light and cancer/brain damage from everyday radiation emissions from “wireless” devices. The state guidance of health and safety best practices for the use of digital devices in school classrooms was created after the passage of House Bill 1110 and only addresses ergonomics and eye strain.

“On the one hand, this is an incredible step forward because in many schools, kindergarteners are handed ipads and clearly this is against the state guidance. However on the other hand, the information omits the most serious health risks associated with digital devices- retinal damage and radiation exposure,” stated Theodora Scarato, Executive Director of Environmental Health Trust.

This summer, MSDE released the best practices on a new webpage which includes: a flyer of the guidelines,  a video about the best practices; a video about how blue light affects sleep; a flyer about proper positioning; a flyer about the 20/20 rule to reduce eye strain; and a Q and A that includes information on how some schools  have Wi-Fi access points that could limit wireless exposures.

MSDE recommendations for digital devices include:

Child health advocates want the guidance to be revised.   “Why didn’t MDH take these issues seriously, research this professionally, and advise school boards, administrators, teachers and parents appropriately?” stated Cindy Eckard, who spearheaded the Bill in Annapolis and maintains a webpage www.screensandkids.us.

Eckard characterizes the MSDE Best Practice Guidelines as a “whitewash” that will “likely put children at greater risk, since a false sense of ‘protection’ will result.” Eckard is calling on MSDE to  revise the guidance with medical evidence-based recommendations and would like to see the County invest in devices with light filters and adjustable settings.

“These guidelines also need to be strengthened to include the most serious health impacts of screens—damage to the retina from blue light and and effects from the wireless exposure. Why are these issues absent? The Maryland State Children’s Environmental Health and Protection Advisory Council (CEHPAC) issued first in the nation recommendations a few years ago for local school districts to reduce classroom wireless radiation exposures, and we certainly expected MSDE to incorporate their expertise. Yet they did not,” stated Theodora Scarato, Executive Director of Environmental Health Trust, who added that FCC wireless radiation limits are outdated and non-protective for children according to hundreds of scientists and a growing body of published research.

Scarato also highlighted that the guidance references the American Academy of Pediatrics (AAP) as an expert group but omits the AAPs recommendations to reduce cell phone wireless exposures. The AAP recommends, “Avoid carrying your phone against the body like in a pocket, sock, or bra. Cell phone manufacturers can’t guarantee that the amount of radiation you’re absorbing will be at a safe level,” and “If you plan to watch a movie on your device, download it first, then switch to airplane mode while you watch in order to avoid unnecessary radiation exposure.”

The National Agency for Food, Environmental and Occupational Health and Safety of France (ANSES) issued a 2019 report confirming the toxic effects of blue light on the eyes and identified children as a susceptible population. “The amount of light received by the retina in the blue band can be large and have phototoxic effects on the eye and a disruptive effect on biological rhythms,” reads the 2019 ANSES Report. However the MSDE guidance omits this information and offers no protections in regards to blue light from screens used in schools.

The MSDE Q and A states that several Maryland school districts install access points that “power down when devices are not being used and power up when needed. This reduces the strength of Wi-Fi radiation in the classroom.” The MD video about eye health states, “It’s also important to use the 20/20/20 rule. So every 20 minutes, you’re going to look away from your monitor and look at something 20 feet away for at least 20 seconds. And encourage frequent blinking so that the eyes can stay moist and have a chance to have a visual break from their work.”

“The Department of Education has repeatedly told parents to follow the guidance of CEHPAC who clearly recommends reducing wireless exposure to children,” stated Scarato, who pointed out that, in 2014, Dr. Joshua Sharfstein, then Secretary of the Maryland Department of Health, wrote a letter that stated, “It is fair to say there are legitimate questions about the long term health implications of microwave radiation” and the Department of Health “would be interested in the advice and counsel of groups such as the Children’s Environmental Health and Protection Advisory Council.”  MSDE also wrote a letter confirming that CEHPAC could provide guidance as they had the expertise in this area. “MSDE should be sharing the guidance to reduce wireless exposure from the state’s expert group they themselves have long recommended.”